From a McLaren Vale vineyard at the foothills of the Adelaide Ranges in South Australia, and enhanced with a splash of Cabernet sauvignon from Currency Creek thus benefiting from several maritime influences. It has vibrant colour, a fresh lifted bouquet, and is full but not heavy bodied. The harmonious palate makes it a welcoming style for drinking all year round.
BUY NOW
It is versatile with usual red wine fare and works particularly well as a cafe style with pizza, pasta and tomato based dishes.

ABOUT FLEURIEU PENINSULA
South of the city of Adelaide in South Australia the most famous region is McLaren Vale for it's substantial red wines and with a climate more influenced by Gulf St.Vincent. Travelling further around, wine regions such as Currency Creek are cooler and breezier being more open to the Southern Ocean, and with exposure to Lake Alexandrina part of the River Murray system as it approaches the mouth in the Coorong near Goolwa. 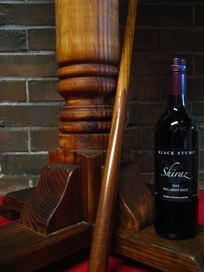